Welcome to the first in a (hopefully regular) series of updates, sneak peeks and bookish thoughts related to my writing projects. I have a few of those because, like most authors, I have a bunch of shiny, sparkly ideas ringing their bells in my head, and it takes a will of steel to tell them over and over again, "not now". To appease the most insistent, I give up real estate on my list of projects in exchange for a little silence, because even when my acknowledgement is no more than, "Yes, all right, I know you're there," it's usually enough to create the brain space I need to focus on those one or two manuscripts at the front of the queue.

Middle grade fantasy If I think too long about how many times I've revised and rewritten this manuscript, I find myself trying to decide whether to cry and lie down or give myself a pat on the back. It's been through three complete 60-70,000 word rewrites plus half a dozen rounds of more minor revisions to each of these incarnations, and the latest version is with my agent again now. Now don't get me wrong. The whole process has been thrilling and exhausting in near-equal measures. I've workshopped it in critique groups, worked with my agent and a structural editor, bounced back and forth with a mentor, and I've learned so much about the story and writing and my process... but, the book's still not there. And that's okay, because I have faith it will be one day, and I've fallen more and more in love with Stella, the thirteen-year-old heroine, her two best friends and her formidable grandmother, in each and every iteration. Perhaps the biggest lessons in all this have been about patience and expectation, and how more of one and less of the other is generally a good thing so long as it doesn't dull your optimism or wreak havoc with motivation. It's a tricky dance, I tells ya.

Young adult fantasy I'm deep in worldbuilding mode for this one and having a lot of fun with it. I've sketched out a (terrible but) functional map, made broad strokes across geography and setting and politics and character, and am now diving into the finer structure of the magical system. I'm reading Sanderson's Laws Of Magic again while I flesh out the rules, and today, at least, I'm feeling good about it. That said, the very scope of this story and my dream to write a true epic continue to daunt me. The skill and discipline it'll take to do this justice is scary. But baby steps, right? I've started writing scenes and short stories to establish the world's history, and I'm thinking about sharing these pieces of fiction here on the website.

Commercial fiction #1 I've been reading a slew of bestselling women's fic at the moment (I finally succumbed to a Kindle and it's been glued to my hand ever since), and I've been feeling more and more into what I like and don't like in this genre. My own project has the working title of The Reunions. I've outlined this manuscript and written the first 10,000 words or so, all of which will go in the bin when I pick it up again. In hindsight, the writing I've done so far is all about backstory and getting to know the characters, and I'm discovering that this is part of my process. I've dumped so many first pages across so many projects that it almost doesn't hurt anymore. (Almost.)

Commercial fiction #2 I've called this one a cross between What Alice Forgot and August: Osage County, and the potential for the story terrifies me. The story is more emotional and much darker than I'm used to reading or writing, and it's going to require a certain touch to get it right. Not ready to tackle this one, but the characters are shouty and persistent, and they won't let go of their grip on this list.

Urban fantasy When inspiration, motivation and enthusiasm desert me, I do The Thing You're Not Supposed To Do and say yes to a shiny new idea. That explains why I've written a 72,000-word urban fantasy novel that I'll probably never own up to (it's not very good) and why I'm 10,000 words away from completing its 50,000-word prequel. I've been too enthralled with my top two projects that I just can't dig up the discipline to get this one done, but I know I'd feel less anxious about life if I could just get to The End of it. I'll try harder. Promise.

Shiny New Thing: What I Want to Read This Week 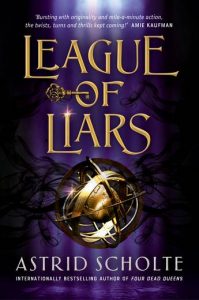 Four teenagers charged with the illegal use of magic get together to devise the ultimate jailbreak. A thrilling YA fantasy novel full of twists and turns, perfect for fans of Six of Crows and Shadow and Bone.

Shadows are dangerous. Edem is illegal. And liars are cowards.

Ever since his mother was killed in a freak edem-based crime, seventeen-year-old Cayder Broduck has had one goal: to have illegal users of extradimensional magic brought to justice. Cayder dreams of becoming a prosecutor and, when he secretly accepts an apprenticeship under the city's best public defender, he plans to learn every legal trick he can to one day dismantle defence arguments. Then he'll finally be able to make sure justice is served.

But when he meets all three criminals he is to defend, he finds they are teenagers, like him, and their stories are ... complicated, like his. As their cases unfold, Cayder must race to separate the truth from the lies and uncover what really happened the night his mother died.

From the bestselling author of Four Dead Queens comes a heart-pounding mystery rife with secrets and danger, where nothing is as it seems...